Panchayat: The 2020 sleeper hit, warmed its way to our hearts by its earnest portrayal of Indian village life. The show takes us into a small village in Uttar Pradesh where an urban, engineering graduate, Abhishek, has to take up a government job as a “sachiv”, and live there. Abhishek, who goes from hanging out at malls and taking selfies with his corporate friends, now has to tackle power cuts, making lauki ki sabzi on a stove, and walk the tightrope between local traditions and red tape even as he tries to implement government policy. Available on Amazon Prime.

Virgin River: The idyllic, romance series is an audience favourite as it enters Season 3 on Netflix. It’s the story of Mel Monroe, who moves to a small riverside town in northern California, leaving behind her hectic life as a nurse in a busy Los Angeles hospital. While she might have said goodbye to gun-shot victims, here she has to tackle weed growers, fishing accidents and everything that comes with a rural life. The series is based on American author Robyn Carr’s eponymous novel. Swades: The 2003 film had Shahrukh Khan playing Mohan Bhargav, who leaves his plush NASA job, to come home to India and “light a bulb” in the small village in Uttar Pradesh. Though he comes in search of Kaveri Amma, who looked after him in his childhood, he begins to embrace life in the village, warts, tradition and all, including drinking non-bottled water. The film is told through Bhargav’s eyes, and addresses issues of brain drain, tradition vs modernity, and how change begins at home. Into the Wild: The award-winning 2007 film narrates the tale of Christopher McCandless, who graduates from a top US university, but is disillusioned with life. He abandons it all and treks to the extreme wilderness of Alaska. Highly unprepared for the harsh winter, McCandles fights to survive and make do with the resources he has. He also sets up a base in an abandoned city bus, and learns how to hunt. Directed by Sean Penn, the film is an adaptation of American writer-mountaineer Jon Krakauer’s book by the same name. Hart Of Dixie:  The five-season show on Amazon Prime, shows young, gifted Dr Zoe Hart who fails to secure a fellowship in New York, because of her “straight, too the point” bedside manners. The only fellowship she could secure was in the back and beyond town of Bluebell, Alabama. She struggles with the southern life, where everyone is up in everyone’s business, a long cry from slick, busy New York. While Hart’s first instinct is to run, she finally falls for the small-town charm and serenity. Funny Farm: While most shows and films have a learning curve attached to them, some are pure disasters. The 1988 comic caper, Funny Farm shares the antics of Chevy Chase, who plays Andy Farmer, a sports writer based in New York. Farmer decides to pursue his dreams and moves to the charming town of Redbud in Vermont. But the seemingly delightful town is full of quirky residents who don’t get along with Farmer.  From digging up exorbitant funeral bills to putting up a house on sale, pranks and charades are the order of the day. The Grapes of Wrath: The 1940 classic, based on the Pulitzer Prize-winning book by John Steinbeck, is often termed as one of the greatest films of all times. While the film is not the idyllic, charming experience that most associate with moving to a farm/small town, it delves into the hardships, both social and economic, that people face when they embark on a journey to search for a better life. We meet the Joads, a farmer family, who lost everything to the Great Depression of the 1930s, and are on their way to California to look for work and better opportunities. The film, was inducted in the United States National Film Registry, in 1989 by the Library of Congress, “for being culturally, historically, or aesthetically significant”. The Grapes of Wrath

Schitt’s Creek: While the hugely popular show on Netflix might not offer the idyllic natural charm of a far-flung country village, the meandering learnings of the extremely wealthy Rose family, as they adapt to a small town in the middle of nowhere, makes for a good story. Spread over six seasons, it is the story of the Roses, who once wined and dined, and jet-setted across the world, but were swindled out of their fortune, and were reduced to live in a motel in a small hick town, called Schitt’s Creek. The town is littered with quirky characters, and have frequent incidents that involve the mayor, and such. But the family comes together as one, and Schitt’s Creek too adopts the Roses as one of their own. 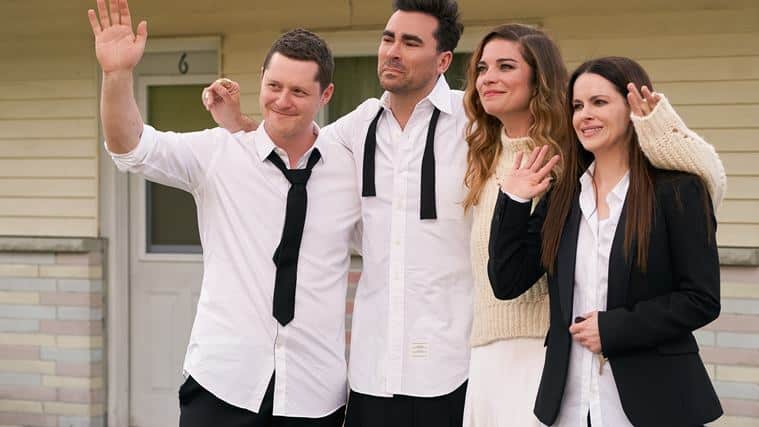